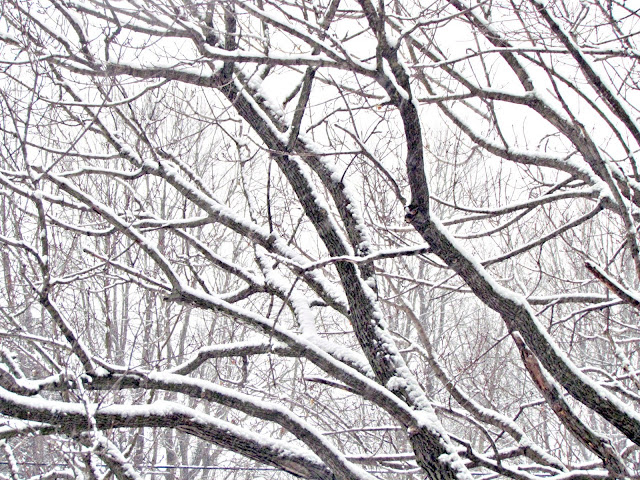 The roads don’t look so good.

At 9:50, he decides the highway will be better than the country roads.

The highway is not that much better. And we have more miles to go than the back way.

I’ve already missed enough games while I was out of town.

So I start again.

I can’t believe we’re going to be late. We had plenty of time if we’d only gotten on the road. Why didn’t you get up? You’d think at your age you’d have learned to plan better. I am so mad at you.

He sighs. “I know. I should have gotten up. Why didn’t you wake me up?”

Why is it MY responsibility to be responsible for everyone else?

I yank the visor down. Flip up the mirror flap. Yep, that’s my mouth moving. And I’m wearing what my son used to call my mean face.

Just so you know, I’m not talking to you for the rest of the weekend!

I guess I should have eaten breakfast.

I jerk my face toward my window. Watch the white world pass. Snap some pictures. Keep my mouth shut.

He stops the car in front of the door.

What are you doing?

“Do you want to get out here?”

He pulls up further to parallel park on the side of the drive but stops before he straightens out.

“Why don’t you get out here so you don’t have to step in the snow.”

I yank the handle, throw the car door open, slam it closed, stalk through slush.

He parks, runs, beats me to the school door, holds it open.

I stomp inside, smile at the money-taker, hear ball thump and feet pound floor. A whistle blows.

I glance up at the clock. It’s already the second quarter. We’re ahead with three fouls. I later find out that two belong Grace.

I plop myself down next to the other “nama” and tell him to “go sit down there.”

But we’re all laughing. And it’s all good.

And as she would say, all is grace.

On Sunday he talks about Jonah.

About how Jonah tried to run from God’s call.

How he got found and tossed and swallowed and urped.

Because God’s the God of second chances.

And so he did what he should have done in the first place, and God had compassion on the people of Nineveh.

Because God’s the God of second chances.

And Jonah got so mad he started spouting stuff like “just kill me now.”

But God doesn’t. Because, he tells us, failure is not final with God.

He’s a God who forgives and fixes.

He is a God of grace and compassion.

He observes that often we learn best from the situations we respond poorly to.

That night we go back to church to watch the movie Luther. I try to take notes in the dark. There are some great lines.

Like when the older monk tells Luther, who fears he is losing his faith,  that “we preach best what we need to learn most.”

Maybe I should teach about grace-filled, salt-seasoned speech.

Let your conversation be always full of grace, seasoned with salt, so that you may know how to answer everyone. ~Colossians 4:6 (NIV)

So when the devil throws your sins in your face and declares that you deserve death and hell, tell him this: “I admit that I deserve death and hell, what of it? For I know One who suffered and made satisfaction on my behalf. His name is Jesus Christ, Son of God, and where He is there I shall be also!”  ~ Martin Luther (in the movie anyway–maybe for real?)

Getting my eyes off myself and counting the gifts: #1KgiftsDare

37. Birds singing for and because of their seed.

38. The gentle snore of one I love–and the ability to hear it.

39. Furnace fan that reminds me of the blessing of warmth in the cold.

January 14: Three ways you glimpsed the startling grace of God.

40. A nine-year-old involved in a rollover accident on the way to her basketball game is okay and still arrives in time to play.

42. The world quilted in white.