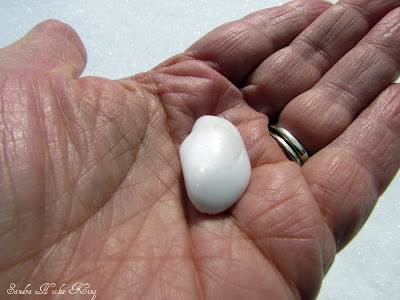 I’m playing with the stones again.

I’m fascinated with a small white one.

But with a small crack and a teeny gouge on the underside.

Or maybe it’s the top. Who really knows with a stone?

I roll the stone in one palm and then the other. Feel how my thumb and fingers fit into the smooth curves.

I take it with me outside and hold it up to sun, compare it to snow sparkle.

I think of the Revelation stones.

But then there’s a white stone.

Whoever has ears, let them hear what the Spirit says to the churches. To the one who is victorious, I will give some of the hidden manna. I will also give that person a white stone with a new name written on it, known only to the one who receives it. ~Revelation 2:17

Thank you very much.

I look it up and find the Greek word for stone here is psephos, and it’s only used twice in the New Testament. Here and Acts 26:10 where it’s translated as “vote.”

And that is just what I did in Jerusalem. On the authority of the chief priests I put many of the Lord’s people in prison, and when they were put to death, I cast my vote against them. ~Paul in Acts 26:10

A white stone might have served as a ticket for admission to some event, like a special banquet.

The winner of an athletic event might receive a white stone–perhaps even with the name of the event or the victor inscribed on it.

And this white Revelation stone? It’s not just white. It’s whiter than pure snow. Whiter than I can bleach my white robe.

It shimmers and shines. Dazzles the eye with a brilliance like Jesus’ clothes at His transfiguration.

As I play with the stone, I ponder this name, the name that only I will know.

What will it be? Perhaps a pet name, an endearing name, an intimate name that He calls nobody else? Something that signifies our special relationship?

Will He place the stone on a diamond-studded chain around my neck where I can reach up and touch it at every thought of Him? Will I run giddy crazy into His arms when I see Him? Will He lean close and whisper my name, my new name?

I shut my eyes against the sun, against the snow, against the world and hold the stone between between both hands and intertwine my fingers, feel the cool. I try to imagine the banquet hall, the marriage supper, walking hand in hand along the water’s edge, my Bridegroom and me.

And He’s given me a stone that proclaims victory and freedom, acceptance and love, entrance and righteousness, life and everlasting joy.

So I’m thinking, yes. I’d rather have a white stone more than the largest and brightest gemstone in heaven.

Thank you very much. 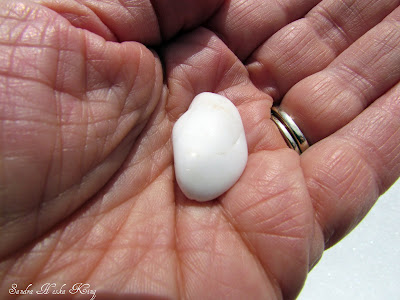 In community today with Laura, L.L., and Michelle.