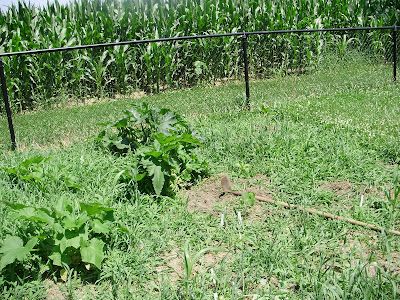 I tried to hand pull some weeds today. And then I hacked with the hoe. But it was so hot. And there were so many.

I couldn’t find the mounds around which I had dutifully poked some cantaloupe seeds.

Back in the height of my May planting fever.

I accidentally yanked out a sugar pea plant. I couldn’t really afford to do that as it left a total of six plants, five of which are kissing each other, so I may have to separate them.

I thought beans were supposed to be easy to grow. I sowed a whole row. I have maybe three plants.

A cucumber tendril wrapped itself around a weed (or was it a bean–who knows for sure?) and would not let go. So I ripped it off in the uprooting.

The tomatoes thrive. So do the squash. And the peppers, though I thought I planted three plants instead of two. And I do have a whole row of nasturtiums. I suppose they’ll flower sometime.

But everything drooped a little, and the ground was cracked. And so I watered the good plants and the bad plants alike. And I considered how we had delayed placing mulch (straw) and how I really need to layer it on now to simply cover up the mess.

So far I’ve found half a dozen zinnias in the space of where I scattered most of a box of seed.

Gracee and her little friend squashed some flowers with the hose.

So here’s the truth.

I love watching the flowers blossom and turn into baby fruit and then mature–turning from fruit to more fruit to much fruit.

I love sinking my teeth into a fresh warm tomato as the juice dribbles down my chin.

I love adding fresh basil to my spaghetti sauce and mint leaves to my iced tea.

I love the parade of colors and the fragrance of flowers.

I love to watch the butterflies and the hummingbirds.

I love everything about a garden.

Except worrying about it.

Except chasing kids and critters out of it.

It’s not my passion.

Because I’m a word gardener.

I love to create new plots.

I loved to collect the seeds of stories.

I love to sift syllables and dig in paragraphs.

Before sunrise. In the heat of the day. After sunset. In the chill of the night.

In all seasons. In all weather.

I’ll probably plant another garden next year. If only to have something to write about.

But I’ll probably be found inside with my computer. Or under a tree with paper and pen. 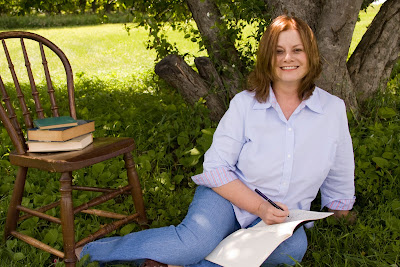 While the garden languishes.