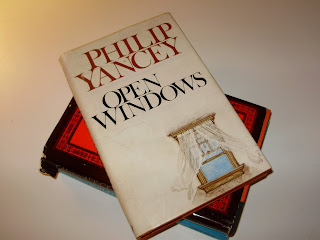 I dig Philip Yancey. Anything he writes. I even got to meet him in person once. He’s not afraid to tackle hard stuff, and his writing inspires me to pursue excellence.

And so I often pull his books off my shelf. Like Open Windows, a book he wrote over 20 years ago in which he addressed the importance of writing with art and excellence. I think it’s still relevant today.

He says that Christian writers must strive for high literary standards in order to be taken seriously.

I believe that. We should stretch high and higher in our art because we represent The Highest Master of art and creativity and excellence.

He urges us to not write stuff that sounds like a sermon. Writers “must take readers on an emotional journey to hold their attention.” He reminds speakers they can’t necessarily captivate an audience with the written word like they can in person. As authors, they have to get more creative.

Yancy says we should explore the magnificence of God’s natural creation, affirm it and “plumb its meaning” before leading people on to a supernatural world. He believes readers hunger for this and says we need “a more supernatural awareness of the natural world and a deeper natural sensitivity to the supernatural world. In our art the two must come together, and fuse.”

He says that sometimes when he reads Christian books, especially fiction and biography, he feels like the characters are “strangely lobotomized.” Read Jeremiah and Hosea and see how graphically the prophets described Israel as a harlot. Old Testament Jews felt words like atonement and forgiveness because they watched a priest swipe a knife “across the spurting artery of a fear-stiffened lamb.” We have to infuse emotion and word pictures in our writing.

We can’t forget that many readers are traveling in the dark, so we can’t turn on the floodlights without blinding them. We have to bring them gradually through the tunnel. “We have to allow the reader to understand lack of faith as well as faith . . . Insanity must sound like insanity. Doubt must sound like true doubt.”

Examples to study: William Faulker (The Sound and the Fury), Ken Kelsey (One Flew Over the Cuckoo’s Nest), Dostoyevsky (Brothers Karamazov).

Yancey  reminds us that the Bible is filled with “rollicking” love stories, drama, history, poetry, and parables.

And he ends the chapter by stating that C.S. Lewis once likened his role as a Christian writer to an adjective humbly striving to point others to the Noun of truth.

“For people to believe that Noun,” Yancy says, “we Christian writers must improve our adjectives.”

I have some reading to do and some adjectives to work on.