No worries. The day stretched before me like a yawning feline.

Got my hair cut and colored in the morning. Clogged floor drain so I couldn’t do laundry. No Tuesday class to prep for because of a planned testimony and potluck.

About 3:00, I decided I’d pay some bills, straighten the house, and start a creative dinner.

But then Abby called and asked if I’d meet her at the store and help pick out thank-you notes. Shouldn’t take too long.

On my way, Jeremy called. He blew a tire crossing railroad tracks, but he’d called a tow truck to haul him to Wal-Mart. All cool.

Abby and I picked out cards. We both needed to pick up a few groceries. She complained of feeling very tired. Gracee did wheelies with the cart.

Jeremy called again. Wal-Mart didn’t have a tire. They put on the spare, and the spare blew on his way to the only tire store in town. He didn’t know what to do. Insurance only allows one tow a day. He didn’t even know if the tire store had a tire, and he didn’t have a number to call, and he didn’t want to call information, and he really wanted to get to basketball, and his dad “wouldn’t” answer his phone, and “I’m really starting to freak out, and the tire store closes in 20 minutes.”

Meanwhile, my phone reception in the back of the store was awful. I ran to the front to hear and to pay for my items (still holding the thank-you notes), remembering that I would need to get gas before I could get to Jeremy. I ran my debit card (as a credit–I always do because I never have enough cash, and I hate to waste checks.)

I forgot! Happened earlier in the day, and I had meant to call the bank. That was on the list of stuff I planned to do “later.” So I wrote my second check of the day with my ear to my phone and ran out the door and over to the gas station to pay for $3 worth of gas in change to get to Jeremy before the tire store closed.

Leaving Abby and Gracee to fend for themselves.

While my own frustration mounted.

Jeremy decided he just wanted to take the bad tire to the tire store and get a new one for $135 (all the money he had just withdrawn to buy some work clothes.) We skidded through the door in the nick of time and left with a new tire. The original plan was for me to take him home to change and then to basketball and then he’d have a friend bring him back to the truck where his dad would meet him and help him change the tire. He decided to change it on his own.

So we returned to the truck–behind which sat a police car with flashing lights. The officer cancelled his tow truck call, and talked Jeremy through changing the tire and even loaned him a sturdier jack.

I stopped at Abby’s to drop off the thank-you notes. And she proceeded to tell me about HER afternoon that started downhill when she was late to pick up Gracee from school. Gracee had a wad of dandelions in her hand, and Abby, envisioning “butter and milk” in the car, told her to leave them and realized her mistake as soon as the words left her lips. Gracee threw them on the ground with a “Fine! They were for you.” Abby tried to redeem the situation by suggesting to Gracee that perhaps Grandma would help her buy a little flower at the store.

Of course, by the time they got to checkout, Grandma was long gone, which threw Gracee into another tizzy because Abby didn’t have the money to buy a flower. In fact, Abby discovered she had NO money and no way to pay for her purchase. At that point, she just wanted to sit down in the aisle and cry. As it turned out, Lee was on his way back from Lansing, so they just waited for him rather than needing my rescue. But at some point, Gracee (yes, sweet Gracee) played the “I just want to die” card, and that turned into an ugly scene–which was resolved by the time I got to their house. Gracee was fine, and Abby had just finished a good cry.

When I got home, I picked a few flowers and took back to Gracee to give to mom. 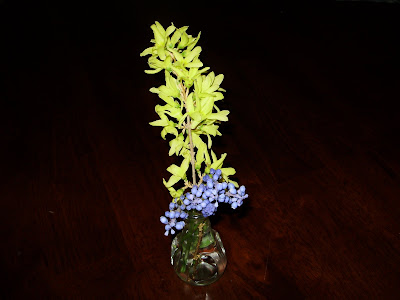 Dennis had managed to call the bank between Jeremy’s calls to discover the bank had put a hold on our card because Dennis had used it the day before to pay for some suits–an unusually large purchase for us with an unfamiliar payee.

Dennis and I ate leftovers in a messy kitchen that night, and I finally paid bills around 9:00–including a credit card, which I paid off–but since it was after 5 on the due date, I can expect to see a late fee.

What did I (and my children) learn on Messy Monday?

Because a day can suddenly turn messy.

And stuff can happen.

Are you a procrastinator? How do you cope when life interrupts your plan?
“Watch therefore [give strict attention and be cautious and active], for you know neither the day nor the hour when the Son of Man will come.” Matthew 25:13 (Amplified)