They pelt my head like little needles. Batter my brain. Tease me.

Sometimes I see them dancing on shampoo bubbles. They dart in the shallows like little minnows and nibble at my toes. Then they swirl away. Gone. Down the drain.

Sometimes they laugh at me and leap over the edge. I jump out after them. Naked. Water drips everywhere. I try to lasso them with toilet paper, stick them to the windowsill with toothpaste, or seal them in the mirror steam. I chase them through the house, grab a pen/pencil/crayon/knife, and write/carve on whatever is closest–a napkin, a newspaper, a bill, a table, a wall.

Yes. It’s the Secret of the Shower. That place where words and ideas gather in the pipes to plan the next attack on an unprepared writer.

But no more! Shock and awe soon to commence. I will win the Battle of the Brain Drain with new high-tech weaponry!

At first I considered a permanent marker to write directly on my body.

Then I considered bathtub markers. 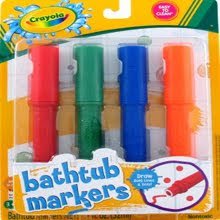 Supposedly they wash off easily. But I have better things to do that clean my tub/shower/walls/ceiling. Like write. Anyway, some reviewers claim they can still stain. Scratch that idea.

And then a friend suggested something that her forester husband uses. She wrote:

“I was right. There are notebooks out there for your shower reveries. 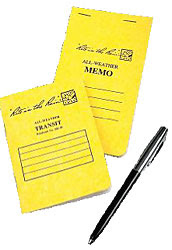 “Rite in the Rain” brand notepads with a coating on the paper making possible to write clear, readable notes even during a rainstorm. Pocket-sized, spiral bound notebooks are $4 to $5, depending on the exact dimensions you would prefer. They also have traditional paper sizes, and even computer printer paper for printing charts that won’t run or ruin.

(Side note: I don’t have pockets in the shower. Is that TMI?)

Now, as I was relating my unusual request to my husband, my grown kids were hanging on every word and making conversation impossible with:
Oh, I know! She could just put a tape recorder in her bathroom and as she got ideas, she could just sing them into it, sorta like singing in the shower, or even singing in the rain!!!!!!! Sighs. Guess you had to be there. I could hardly speak for laughing.
So there you go–everything my whole family knows, delivered to your door with a smile.”

They even have special pens! So a writer can capture every sense of a rainstorm–in the middle of the storm!

And then I found this product. 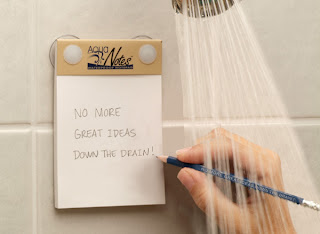 Maybe a little more pricey, but with suction cups for pad and pen!

So there you go. No more ideas down the drain!

Both products on order. I’ll let you know what works best. So glad my husband bought me a new hot water heater for my 60th birthday.

Now does anyone manufacture a waterproof computer?

How do you capture shower ideas?
Copyright © 2010 by Sandra Heska King