The church bulletin bloopers posted over at Author Culture last week inspired me to collect some from the medical world. Luckily we know the true meanings. Or do we? 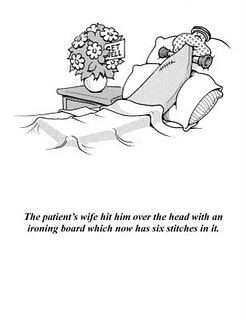 1.  Apparently the next day she developed this rash on her hands, and the feet had gone away.

2.  The patient left the hospital feeling much better except for her original complaint.

3.  She slipped on the ice and apparently her legs went in separate directions in early December.

4.  The patient has been depressed ever since she began seeing me in 1983.

5.  On the second day the knee was better and on the third day it had completely gone away.

6.  The patient has chest pain if she lies on her left side for over a year.

7.  Patient was alert and unresponsive.

8.  Past medical history significant for a basal cell carcinoma on her head which was removed recently.

9.  She fell and hit her left forearm against a rock which remains painful and swollen today.

10. The patient fell while rollerblading on his left hand.

11. The patient had a similar episode in the past when she was exposed to cats with severe wheezing.

12. She lost her cool this week and apparently blew up her husband and her daughter.

13. She sometimes has difficulty initiating her legs to start a walk.

14. She is ambulatory with her father at discharge, who happily sucks a popsicle.

15. The patient lives at home with his mother, father, and pet turtle, who is presently enrolled in day care three times a week.

16.  By the time he was admitted, his rapid heart had stopped, and he was feeling much better.

17. The patient refused an autopsy.

18. When she fainted, her eyes rolled around the room.

19. Patient has two teenage children, but no other abnormalities.

20. Patient was alert and unresponsive.