My son moved back to town. Even though his first apartment was only the fling of a Frisbee from work. He missed us. He missed his hometown. So he decided to trade spaces. In fact, he paid rent on two digs this month in order to secure a good deal on the new place, now 20-plus miles from “the shop.”

He admits to being “OCD.” Not Monk. But very particular. Can’t tell that anyone ever lived in the old rental. Literally. Looks better than when he moved in.

Also not a procrastinator. He ruminated the plan. Then bolted like a buck fleeing a bullet. Company ready within a couple days.

We visited him Friday night. Practically new two-building complex. Even smells new. One bedroom apartment supplied with a dishwasher, over-the-range microwave, washer and dryer for about $100 less than the other place. Vaulted ceiling in the living room. Woods with a view.

There’s a calm peacefulness to this 21-year-old’s surroundings. Simple. Sleek. Clean. Collages of family and friends. No scattered photos. No clutter.

Abby and I thought we had made real progress cleaning off her desk Saturday. I mean, we even believed FINDING the desk was a major deal. Jeremy took one look at the white bill organizer, breast cancer pink file box, and two goblets on the upper shelf and declared, “Too much stuff.”

So today I struggle with jealously and wistfulness. Looking around with my son’s eyes. And even after the declutter rampage of the last year, I say with him: 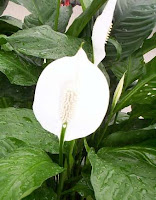 Simplicity still out of reach.

And it begins again.

What stuff can you eliminate from your surroundings or life today?

“There are two ways to get enough: one is to continue to accumulate more and more. The other is to desire less.” ~G.K. Chesterton