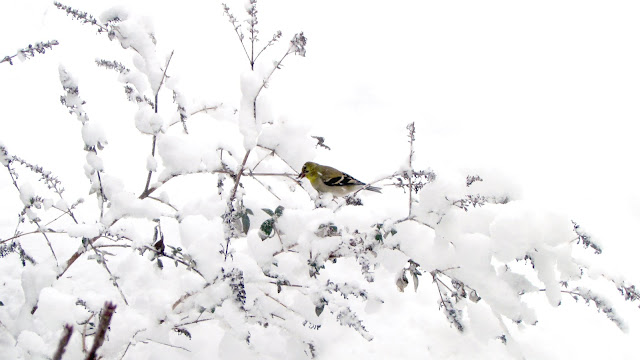 There’s a hush this morning.

Branches bow under the weight of wet white grace.

I stand robe-wrapped and slippered on the porch and drink His whispers.

Come to me all who are heavy laden, and I will give you rest.

Giant flakes fall, and boughs droop to kiss the top of the Journey.

There’s school this morning, and the roads are messy.

Grace and I pray that the Journey hugs the road, that He hugs us as we drive.

I think about Lisa Jo’s word prompt this morning–grit.

I think about how He entered our mess, hugs us through our messes.

And as I see the beauty around me, I think about one with grit-crusted eyes.

Jesus saw him when others who saw didn’t.

And the Light stopped in front of his darkness.

The man could not see the journey-dusted feet in front of him.

The One with earth’s grit between His toes.

But he heard his voice.

Neither this man nor his parents sinned, but this happened so that the works of God might be displayed in him.

Don’t look for who to blame. Look to God.

(So He didn’t say that last line exactly, though He did kind of did in the Message.)

What did he think when he sensed Jesus stoop in front of him?

Did he recoil when he heard Jesus spit?

(How many times did Jesus spit? Or was it just one big glory glob?)

He could not see Jesus make mud pies in front of him.

He could not see him make the mess that would heal his mess.

Did the dark get darker when Jesus smeared it over his eyelids?

What did he think as he stumbled towards the pool to wash the grit from his eyes?

I once was lost but now am found, was blind, but now I see.

And I am amazed.

At how He became dusty for us.

How He sees us still–the broken, the bowed, the heavy-laden.

How He sees us when others seem blind.

And we don’t have to sit in the dust.

He can even use the grit of our lives to polish us.

He gives us eyes to see and the glory-strength to rise above the ashes.

Then He holds out His hand and invites us to make mud pies with Him.

We don’t do this journey alone.

Disclaimer: I have no idea how long this took. Yes, it was longer than five minutes. Yes, I edited. But Lisa-Jo did provide the prompt.

We pray that you’ll have the strength to stick it out over the long haul—not the grim strength of gritting your teeth but the glory-strength God gives. It is strength that endures the unendurable and spills over into joy, thanking the Father who makes us strong enough to take part in everything bright and beautiful that he has for us. ~Colossians 4:10-12 (Message)