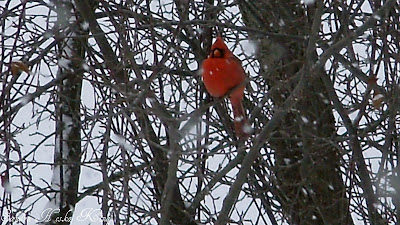 on a naked branch 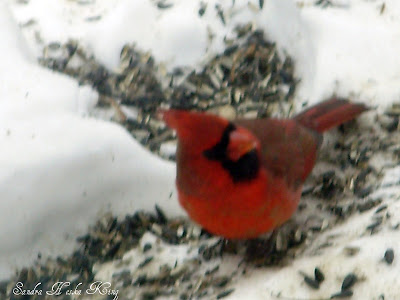 Hope is that thing with feathers that perches in the soul and sings the tune without the words and never stops . . . at all. ~Emily Dickinson 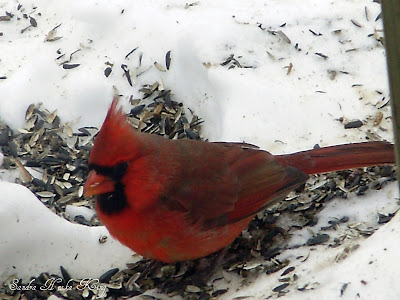 Floating flakes swirl large and gentle, sifting into mounds, powdered sugar soft. They fluff under my feet as I, robed and slippered white, scuff out to the feeders.

Mrs. Cardinal, head down, pecks at crumbs under the breakfast table, dressed in drab and blending in with the other diners.

She’s too fearful for a photo.

But looking up, I’m startled by her king, scarlet feathered. 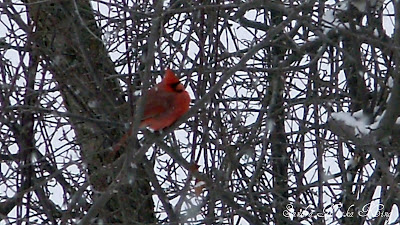 The male cardinal almost always surprises me, leaves me breathless.

Blood against the bare.

“How then can a man be righteous before God?
How can one born of woman be pure?
If even the moon is not bright
and the stars are not pure in his eyes,
how much less man, who is but a maggot
a son of man, who is only a worm!”
Job 25:4-6 (NIV)

The crimson “worm” is really an insect, a grub. About the size of a little berry. When the time is ripe, the wingless female climbs up a tree and attaches herself to it.

There she lays her eggs, births a family.

She bleeds a crimson juice that covers her “children” and leaves a red stain on the wood.

She dies so they can live.

Back in the day, folks harvested the bodies and crushed them to make a scarlet dye. L.L. puts it this way:

“Such colorful artistry was not lost on the ancients. They gathered this scarlet creature and crushed her to produce a crimson dye. And crimson, right up there with blue and purple, was used to dye wildly expensive clothing and tapestries. So it seems that Jesus, crushed in shame, offers to cover my nakedness–not only with the linen of his life, but also with an exotic color reserved for the rich and royal.
Just picturing this wine-crimson grace, I feel my soul tingle, as if it’s growing wings. And the shame of my past, though real, cannot keep me earthbound.”

Tiqvah is first used in Joshua 2:18 and translated “cord.” David’s great-great grandmother, Rahab, the Gentile harlot named in the genealogy of Jesus, tied a cord in her window, and her family was saved when the walls of Jericho fell.

A scarlet cord. Likely stained with the crushed body of a towla worm.

A cord to cling to when things seem hopeless.

A cord of hope that connects us to Hope.

Hope for a new story in the midst of brokeness.

The thread, the cord, the hope, the Hope, that runs throughout the pages of scripture.

I can’t see a male cardinal anymore without seeing hope.

Praying that hope rises in you this weekend no matter what swirls around you.

You may see hope in the branches. 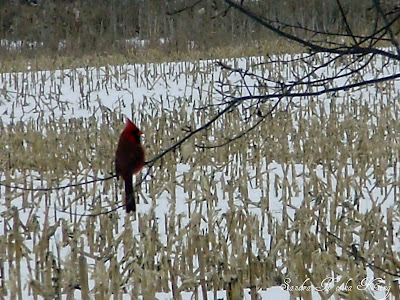 Linking to the Faith Barista for this week’s jam on hope.
And with others spilling imperfect crumbs in the Hush of the Moon.

Parts of this post were pulled from the archives of this blog.