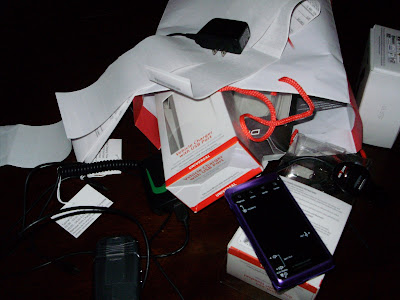 I am in a land of shiny things.

Where inhabitants speak a strange language and rows upon rows of shiny alien mouths line up neatly on shelves. I’ve owned these before. Their little jaws have bitten me in the past. Snapped right on the web between my right thumb and forefinger and wouldn’t let go.

I’ve come back for a mini lesson on the care and feeding of my new pocket pet. Like how to respond when it demands attention. I don’t even know how to answer it or talk to it.

And it needs a longer leash. AKA a charger cord thingie so it doesn’t hurt itself by jumping off my nightstand.

And I need to talk about things like running apps and saving batteries and social networking and earbuds and visor doohickies–while others around me snicker.

We come to this place every two years.

And every two years I leave with a headache.

And a desire for the shiniest.

Even though the reality is that though they dazzle my eyes, I don’t navigate well in their shining.

This year is easier.

Because it’s just us. Hubby. Me. And our biting pets. No other family members in tow.

Bigger and better taunt me. Things called iPads and smart phones and netbooks and mounts and skins and blue teeth.

These pets have names like Fascinate and Zeal and Galaxy and Blackberry (Curve or Bold) and Accolade (hmmm), and Alias and Convoy and . . .

They all sparkle and dance and cry, “Me! Choose ME!”

Last time I wanted to take home a Blackberry. A Storm, maybe? But we couldn’t justify the cost, and so I settled for a biter.

And I was not happy.

I was a biter myself for about a week. Moped and growled and snapped at everyone.

I even kept my pet red Chocolate (why was there no BROWN chocolate?) close for several months, not ready to put it down.

And for two years, tethered to the far reaches of the Internet, my right thumb joint spasmed as it paged down.

But now–now we’ve got COUPONS!

As in FREE. My husband’s love language.

I’ve decided on an alien named Droid. And I’m not giving in to snapping jaws.

Although my husband did. He favors the forgotten.

Anyway, out we come with two bags of phones and accessories and a bill high enough to rival the national debt on the family plan. And terror-stricken at the thought of losing rebate receipts.

Losing rebate receipts is NOT my husband’s love language.

Droid made strange sounds all night. Makes them today. Snuggled right here next to me.

Drooooid! (It speaks to me!)

And a harp-like ring.

And do I touch, multi touch, touch and hold, drag, tap, or double tap?

But what if these sounds become so familiar, I learn to ignore them?

What if I lose my wonder in the familiar?

It does happen. All the time. Every day.

Living in the Land of the Familiar where God shines in the smallest things.

While my wonder wanders.

And so I’m unplugging for a bit and heading out to the yard.

To find His glow and let Him shine me up.

And I’m sure Droid and I will bond soon, and I will go through this again in another two years.

Plugging in with L.L. Barkat’s On, In and Around Mondays again today. She’ll be there soon. Unless she’s lost in the Verizon store.