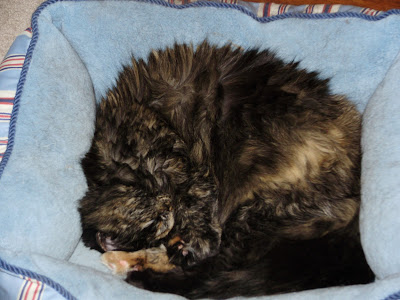 Our geriatric kitty has cancer.

We just found out yesterday when the vet called with the results of the biopsy.

It’s in her sinuses and untreatable.

Until yesterday I kept her confined to my office where I could observe what she ate (nothing but a few laps of milk unless I force fed her) and how much she used the litter box.

She’s a hider, so I hid her away so I could find her for her medicine. And to keep the younger cat from terrorizing her.

In the last couple of days, she has begged to roam. So I let her out yesterday, and she went straight to the usual supper spot. She sniffed but did not eat. Not surprising since she can’t smell. She even refuses the strongest fishy smelling food I can find.

Nor would she drink the water.

I shut her up for the night and let her out this morning.

I don’t know how she did it.

She is nothing but bone. And she somehow jumped to a table and from it to the kitchen counter. A three-foot leap.

She has never gotten on the kitchen counter.

I found her drinking water from a soaking oatmeal bowl while water from the tap dripped on her.

And then she jumped to the floor. I held my breath waiting for a leg to break.

I don’t understand it.

There is easily available water in two rooms.

But she wanted it from a higher source.

I thought about the times I’ve suffered from cancer of the spirit and sought to drink from the easy places.

But the only water that quenches that kind of thirst comes from a Higher Source.

And it’s worth the cost.