“Worry is a cycle of inefficient thoughts whirling around a center of fear.” ~Corrie Ten Boom 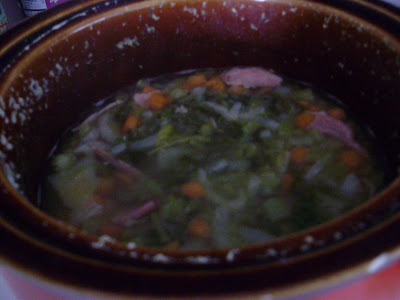 I pull out the old red crockpot that my mother-in-law gave me 35 years ago. I have newer ones, but I like this one better for soup. I chop onion, dice carrots, slice celery and snip the leaves. Pour in split peas. Salt. Pepper. Stir. Cover.

Gracee has a rash on her face, and so I go to school to pick her up because Abby is caring for a friend post surgery.

A delicious aroma wafts out the window and curls under the door, and Gracee complains. “What is that awful smell? It reeks!”

I guess she won’t be having soup for supper.

It strikes me that I often (well, used to) make soup out of worry.

A little of this worry and a lot of that. Stir it all up. And turn up the heat.

It smells! It reeks! The stink of it clings to me and spreads its fumes everywhere.

Making that kind of soup is a waste of time. Time that could be better spent doing something worthwhile. And nobody wants to eat it anyway. And it’s certainly not as healthy as split peas.

Better to take that pot and dump it in the field.

Because, really, why should I spend time worrying about something I can’t change?

Or something that might happen (but probably won’t) that I can’t do anything about anyway?

Most of the things I’ve worried about never happened. Some did. And some things turned out worse than I could have imagined.

But I came through. Survived. Gained strength.

And why worry about something I can control? Why not just do whatever needs doing?

Worry paralyzes me and drains my strength.

And one more thing. Isn’t worry just pride in disguise? Thinking I can take control of something only God can control?

I can even make worry an idol.

Yet God is the God of the what was, what is, and what ifs.

So I’m going to give all the ingredients to Him and let Him make the soup. Minus the worry. Because I know it will be good for me and maybe even eventually smell good.

Also offering this post for Emily’s Imperfect Prose on Thursdays.