I have a writing room of my own. I offered a tour here.

But I’ve gravitated to the living room. To the soft leather chair with the soft leather footstool. With the laptop on my lap. Or half on the footstool and half on my knees. Front row center for Tiger baseball games. And because Gracee, when she’s here, prefers me to be on her level rather than sequestered in the penthouse.

My studio (I like to call it a studio–it sounds so artsy, so writerly) is neat.

My summer seating is not.

a cat licks lemonade swirl ice cream
from the chocolate-coated spoon and bowl
(katdish’s fault–she made me do it)
that sit atop a notebook on the floor to my left
next to a dirty white slipper
(where IS the other one?)
a fan of bills that aren’t due until next payday
and 101 Sneaky Weight Loss Secrets
with Stone Crossings open to forest star
and plastic wicker book bag leans
against black computer bag that leans
against the chair
and to the right a Woman’s World
Walk off 120 lbs the easy way
a Barnes and Noble receipt
WordPress for Dummies
several explanation of benefit payments
(this is not a bill)
a credit union statement
and on the footstool my camera
a couple pencils and a red pen
still more bills and a
40th anniversary discounted subscription form
for Poets & Writers
on the antique table topped with a chicken lamp
Cinderella III (Gracee’s) and the DVD remote
four backup CDs, a book of check carbons,
a pile of paid receipts and a cell phone
two bookcases that beckon
harp and hammered dulcimer mock untouched
and a rerun of this afternoon’s Tigers’ game plays
as I sit on the very edge of the cushion
while the cat purrs behind me
I write in place
and stay because I will trip on the cords
if I move from my summer seating. 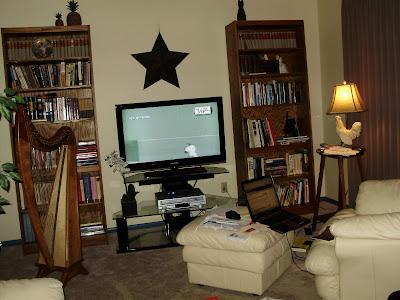 Written for L.L. Barkat’s prompt to write in place On, In and Around Mondays at Seedlings in Stone. Yes, I know it’s Friday. Consider it around Monday–the next Monday. And go check out the other links.