I’ve begun to work my way through The Right to Write by Julia Cameron.

” . . . most of us try to write too carefully. We try to do it ‘right.’ We try to sound smart. We try, period. Writing goes much better when we don’t work at it so much. When we give ourselves permission to just hang out on the page.”

So I was sitting here, not working, not trying, just hanging out on the page, when Scruffy, who was curled up on the back of my chair, suddenly stiffened, and her pupils widened, and her tail twitched. 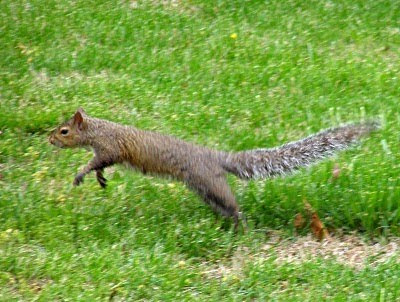 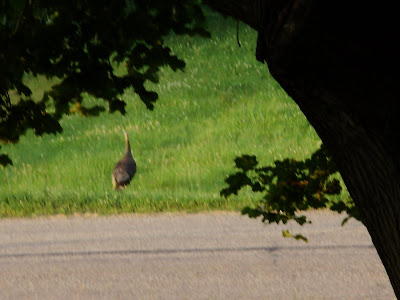 Sidetracked, but just minutes before she (he?) strolled down the center of the road. Just hanging out. Taking in the sights, the sounds, the smells.

Heading toward “a wavery magical spot” shimmering ahead.

I wonder what kinds of words a turkey writer uses. What does a turkey call a human? How would a turkey describe me as he peers from behind that tree? What stories does he tell his turkey friends? Does he talk turkey, get serious, pull out the white board and try to solve the problem of humans in their habitat?

Or does he just go with the flow? Forget himself while his feathers quiver with the wonder of “rich treasures, beautiful souls, and interesting” humans. Does he just put his little claw in the dirt and write what he hears?

“We can either ‘think a plot up’ or we can ‘jot a plot down.’ We can either ‘think of something to write about’ or we can write about what we happen to be thinking about.”
“How much control are we willing to surrender for the sake of allowing creativity to move through us rather than our trying to flog it forward for agendas of our own?”
“Most of us are really willing only to write well, and this is why the act of writing strains us. We are asking it to do two jobs at once: to communicate to people and to simultaneously impress them. Is it any wonder that our prose buckles under the strain of doing this double task?”
Wait.

I’ve forgotten I’m supposed to be disturbed today. Maybe I am since I’m writing like this about turkeys.

Which brings up the question.
Did you know that three consecutive strikes in bowling is called a “turkey?”
Nobody really knows the origin of that, but here’s a possible answer.

“There used to be sweepstake tournaments during the holidays, Christmas and Thanksgiving. If a person bowled three strikes against the heavier pins (usually four pounds), the crowd would scream ‘turkey,” and the bowler would receive a live turkey for his or her performance.” (from Life’s Imponderables by David Feldman.)

And now you know.
So go write something.
Just
start where you are.
And be sure to check out all today’s other pleasantly disturbed posts over at
Duane Scott’s Pleasantly Disturbed Blog Carnival.