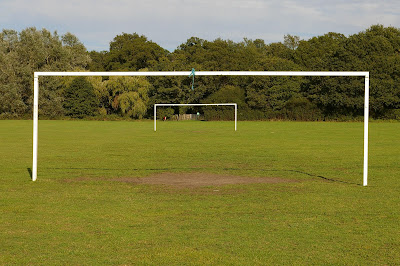 Mike was a police officer. Joanne was a nurse.

Mike and Joanne played soccer in college. Their kids played practically from the time they could walk.

They lived life on the run. Church activity to church activity. Doctor to doctor. Game to game. Goal to goal.

Then Ben began to run. Away from the family. Into trouble. Back home to steal money or a car.

To run some more. Away from the law.

A black blanket billowed over Mike. He burrowed under. Grateful for the insulation.

One day Mike and Joanne argued. Over some small something.

Joanne ran to the store.

Joanne found him an hour later. Behind the house. With his gun next to him.

And the weight of his pain fell on her.

And she ran, pounded pavement. And the pounds melted. And the weight fell away, leaving a bony frame that enclosed an empty shell of life once known.

She clawed her way from under the darkness.

But still she runs.

A young man once ran. To chase the ways of the world. To find his fortune.

And his father waited. Watched. Until he saw him in the distance. Coming home.

And he ran to him.

“I’m not saying that I have this all together, that I have it made. But I am well on my way, reaching out for Christ, who has so wondrously reached out for me. Friends, don’t get me wrong: By no means do I count myself an expert in all of this, but I’ve got my eye on the goal, where God is beckoning us onward–to Jesus. I’m off and running, and I’m not turning back.” Philippians 3:13-14 (Message)

Where are you running today?
Copyright © 2010 by Sandra Heska King