Steve has authored over 100 books and hundreds of articles. His book, The Long Trail Home, won the 2002 Christy Award for excellence in Christian fiction in the category western novel. Three other books, Picture Rock, The Outlaw’s Twin Sister, and Last of the Texas Camp were Christy Award finalists. Steve is a speaker, pastor, past mayor, dad, and wife to Janet–who is also a writer. He’s a third-generation westerner who spent his early years working family ranches and farms in central California. He now lives in the mountains of north-central Idaho and in his spare time collects antique Winchesters.. He also works on the construction of Broken Arrow Crossing, a false front western village near his home. And he’s seldom seen without cowboy boots, hat, and jeans.

And stay tuned for a One-Word/One-Line interview with a giveaway of an autographed copy of Cowboy for a Rainy Afternoon.

Thanks, Steve, for visiting The Write Pursuit today and sharing a little about western novel research, especially as relates to your newest book.

Do They Sweat in Duke City? / Fiction as Research by Stephen Bly 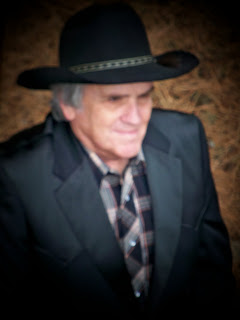 New Mexico heat blanketed Albuquerque that July like too many covers in a stuffy cabin  . . . the kind of day that you sweat from the inside out and feel sticky dirt in places that you don’t ponder too much except in the shower.

From Cowboy for a Rainy Afternoon
Released June 2010

Every novel’s got a place and time. That often means plenty of research. My next release, Cowboy for a Rainy Afternoon, is set in Albuquerque, New Mexico, 1954. So I needed to know some things about a specific city, a state, and what the world was like that year.

It’s tough, dirty work . . . but I love any time I can go to New Mexico. The only other site I’ve been that boasts similar layers of culture stacked one upon another: Rome. Yet, New Mexico’s still a cowboy state. From the Pecos River in the east to the Plains of San Agustin in the west, from the Sangre de Christo range in the north, to the “bootheel” in the south, it’s full of great ranching country. A perfect setting for a cowboy story.

My wife, Janet, and I drove up and down Historic Route 66 that runs through Albuquerque. It was known as the “Main Street of America” or the “Mother Road.” It was the primary route for those leaving the dust bowl of Oklahoma and moving to California during the Great Depression. Albuquerque was selected as a stop on the first transcontinental air route in the 1920s, and Route 66 brought the first transcontinental motorists through the city. 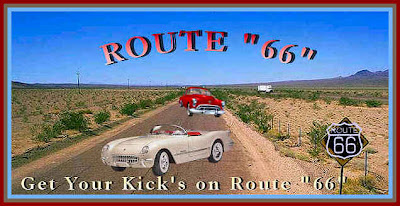 Duke City is a nickname for Albuquerque because it was named after the Viceroy Francisco Fernandez de la Cueva, the Duke of Alburquerque. Later the spelling was changed because some influential person couldn’t pronounce the “R” in Alburquerque.

The cowboys in my story retire in Albuquerque, not Santa Fe, because even in 1954 the latter was becoming the artsy, celebrity spot it is today. These guys needed a cheap hotel and city amenities. So Albuquerque suited them fine. Before there were retirement communities and senior citizen housing, some elderly lived in old downtown hotels. Well past their prime in attracting overnight guests, they catered to senior citizens who scraped by on something fairly new in the fifties: Social Security.

One of my favorite governors hails from New Mexico. Governor Lew Wallace authored the novel Ben-Hur (a movie made in 1959, starring Charleton Heston), and he also tried to negotiate with the notorious Billy the Kid. What an eclectic group of folks tramped the Old West.

A piece of historical tidbit . . . a hard thing for some readers to realize: in 1954 no one considered cigars or cigarettes or their second-hand smoke in any way harmful. That’s why you see so many actors and actresses lighting up in the movies of that period. Cowboys often carried peppermints, which were tasty, portable, and covered up the smell of such vices, at least so they thought.

Research Thru Learning the Language

The main challenge of fiction: the rhythm of dialogue. I had to sit very still and listen to each character speak in order to get the timing right, along with the vocabulary.

Every era boasts its own unique language. Every region develops a dialect. For the writer, both can be learned through research and careful study. But tone, timing, and cadence can’t easily be taught. It’s better to be in your bones. A writer’s challenge is to develop instinct for tune as well as lyrics of speech. There has to be a natural flow.

To know the right lingo steps up a novel’s authenticity. In Cowboy for a Rainy Afternoon I got to use a lot of the classic cowboy terms that got lost over the years. I tried to stick an interior explanation to explain a few that might confuse.

For instance, a McGee is cowboy slang for a 4-strand rope made of a maguey (century) plant.

A phrase often used on a cattle drive or roundup was “man at the pot.” That meant someone was at the coffee pot for a refill and that shout-out indicated the guy was to fill everyone’s cup.

Pop/Grandpa would “do to ride the river with.” That’s the ultimate compliment for a cowboy. Crossing wild rivers with great herds of cattle exposed dangers for man and beast. Not a time to trust your safety to some rookie just learning the ropes.

“You never know the luck of a lousy calf” . . . one of my favorite cowboy sayings. Big, healthy, sturdy calves seem to fall off cliffs or get attacked by wolves. It’s the scrawny, worthless ones that live forever.

I’ve often wondered why we stopped using colorful words like “footpad.” So called because of guys who pulled off their boots and snuck around in stocking feet so no one would hear them.

In 1954 an old man’s vision of feminine loveliness would be Bow, Grable, Monroe, or Kelly. Grace Kelly in High Noon stole my own ten-year-old heart. However, I figured she wasn’t too smart because she couldn’t understand why Will Cane had to turn back. But I did. Shoot, that’s in a cowboy’s bones. But, my oh my, she surely was purdy.

My bedroom was stacked with White Owl cigar boxes, my granddad’s favorite cigar. He didn’t smoke them much; mainly he chewed them. And because I lived across the road from him, I got many of his boxes. Lots of childhood treasures can be stored in a cigar box.

I listened to Sergeant Preston on the radio. What memories. How I wanted to be a mountie and own a dog like King.

One of the advantages of modern autos . . . they run so smooth there’s seldom a backfire. But those random air-shattering blasts from the old rigs added adventure to an otherwise ordinary, routine day. Me and my young pals surmised the sound as a gun blast from a bank robber making his get-away, even though my hometown had no bank. That fact didn’t darken my vivid ten-year-old imagination.

The summer of 1954, in Albuquerque, a ten-year-old boy becomes a Cowboy for a Rainy Afternoon. 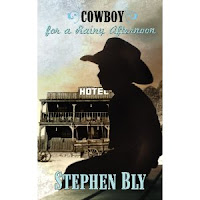 Find Steve at his website.
Enjoy his new blog.
Follow him on Twitter.
Cowboy for a Rainy Afternoon is available on Amazon or from his website’s bookstore.