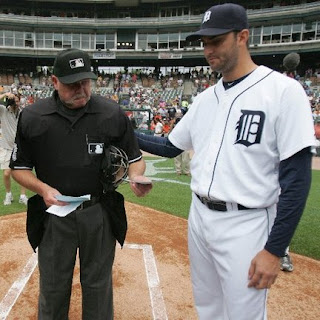 I listened to the end of the game on the way home from the hospital last Wednesday.

I could feel the excitement through the radio. The noise was deafening. Ninth inning. Twenty-six Cleveland batters out. Tiger pitcher Armando Galarrago one out away from a “perfect game.” Cleveland batter Jason Donald hit a ground ball. Routine play. The first baseman, Miguel Cabrera, snagged the ball and tossed it to Galarrago, who touched the bag ahead of the runner.

Done deal. Out! Positively, absolutely, undeniably, and reliably OUT!

He smiled, said nothing, and went back to the mound to get the next batter out.

And later Joyce apologized. He and Galarrago shook hands.

Joyce could have taken the next day off. But he didn’t. He took his place behind home plate.

Lessons that would have been lost if Donald had been “out.”

Instead we have perfect lessons from a “less than perfect” game.

I can’t imagine any better outcome.

A perfect game that wasn’t.

The Tigers will donate the first base bag, Galarraga’s spikes, and a ball from the game to the Baseball Hall of Fame.

The story will be told.

And lessons will be learned.

In baseball and in life.

Because no matter what “bad calls” come our way, it’s all good, because we are safe.

Safe in our Father’s arms.

And He turns the “bad” into good.

And I can’t imagine any better outcome.