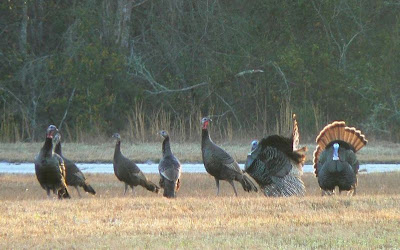 I wrote about some turkeys the other day on Beholding God. And I wondered, “What do you call a bunch of turkeys anyway?”

And then I stumbled on some way cool words to describe them. And other birds.

For instance, here are some of my favorites. In no particular order.

A rafter/posse/gang of turkeys.
A pandemonium/prattle of parrots.
A pitying of turtledoves.
A flock of ducks (flight).
A badling/brace of ducks (ground).
A raft/team/paddlling of ducks (water).
An ostentation/muster/pride of peacocks.
A lamentation/ballet of swans.
A host of sparrows.
An ascension/exaltation of larks.
A clutter/murmuration of starlings.
A conspiracy of ravens.
A descent/gatling of woodpeckers.
A dissimulation/flock of ground birds.
A volary/brace/plump/knob of game birds.
A wreck of sea birds.
A chattering/clutch of chickens.
A mustering of storks.
A mutation/hermitage of thrushes.
A party/scold of jays.
A dole of doves.
A dropping of pigeons!
A gaggle of geese.
A sedge of cranes.
A squabble of seagulls.
A stand/flamboyance of flamingoes.
A wake of buzzards.
A watch of nightingales.
A wisdom/parliament of owls.
A colony/cloud of bats
A convocation/aerie of eagles.
A cast of hawks (general).
A kettle of hawks (flying).
A boil of hawks (spiraling).
A tiding/gulp/murder/charm of magpies.
A pod of pelicans.
A bouquet of pheasants (takeoff).
A congregation of plovers.
A venue of vultures.

There are some colorful animal groups, too. Next time.