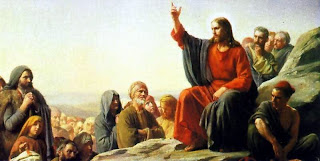 When Jesus saw the crowds, He went up on the mountain; and after He sat down, His disciples came to Him. He opened His mouth and began to teach them. Matthew 5:1-2 (NASB)

He opened His mouth.

Then it dawned on me. He’d been teaching already. A lot by example. Touching and healing and loving on folks.

He’d taught and preached in the synagogues and gathered quite a following. And a huge crowd from all over the area joined up and traveled with Him. Probably more than could fit in the synagogue. And some who would not be welcome in a synagogue.

So He climbed up on a hill where the crowd could see Him, in a natural, open-air amphitheater. Maybe His voice would carry further. And He sat down on the hill. Sitting could have signified the coming of an important, official word.

Or it could have meant He planned a long sermon, and the group might miss the afternoon fishing tournament!

The committed ones jostled their way up the hill to be close to Him. I get that. I always want to be in the front row to see and catch every word of an inspiring speaker. I mean I crashed through the door and knocked fifty people to the ground to catch the enthusiasm of Richard Simmons up front and personal.

(Okay, I know some of you aren’t going there, but I had a great time!)

And He opened his mouth. To speak loudly? To speak clearly? To be heard and understood?

He opened His mouth. He didn’t speak through clenched teeth like I’ve been known to do in an angry moment–spitting venom and hissing orders and hurtful words, like a pharasitical snake.

Not such a great example of caring and love on my part.

And He began to speak words that would knock their sandals off. Words overflowing from a superabundant heart full of love and compassion. With authority and power. Words that challenged what the listeners believed, that contradicted what they had been taught.

Are others likely to listen to you because you’ve already taught by example?