A Facebook friend posted this a couple days. I raised my hand. “Me too! Me too!”

Especially when it comes to temple care. Like in diet and exercise. In fact, here’s me getting physical.

This little dude pretty much sums up slothfulness. Inactivity plus. A disinclination to work or exert oneself. Think sloooowwwww. Or not at all.

Slothfulness is even considered one of the seven deadly sins. Especially if you are spiritually slothful. Not such a great thing. In fact, early Christians apparently thought of it as a surrender to despair.

A German proverb says, “For the diligent, a week has seven days; for the slothful, seven tomorrows.”

Okay–so slow, lazy, undisciplined, negligent, apathetic. Not so good. I so get that.

But I learned some cool stuff about sloths.

They spend most of their lives upside down. God designed them to have a very good grip. 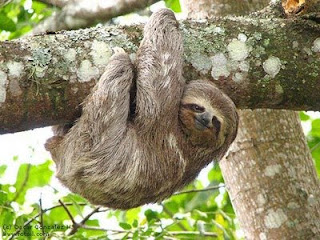 Sloths can live up to be 30 to 40 years old. Some even stay in the same tree for years. Under the protective branches. Camouflaged by a coating of algae. Not flying out in the open or running around on the ground. They live a simple life.

They are not lazy. Just slow moving. In fact, the sloth is the slowest mammal on earth. It doesn’t live in a state of frantic activity.

They have a low metabolic rate and low body temperature at 91 degrees. So I guess you’d say they seldom get “steamed.”

Because they don’t have a lot of energy, their need for food and water is kept at a minimum. They can be content with little.

Besides the dolphin, the sloth is probably the only other mammal that continually smiles.

And then I found this picture. 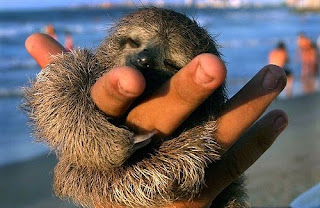 And I thought, “Wow!” I don’t want to be slothful. But I do want to be a baby sloth! Nestled and at perfect peace in my Father’s hand.
How about you? Wouldn’t you rather be a sloth?
“The fool sits back and takes it easy. His sloth is slow suicide.”  Ecclesiastes 4:5 (The Message)