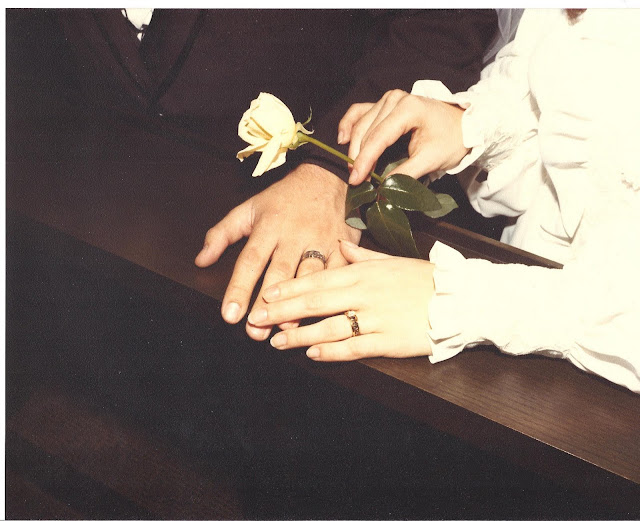 December 4, 1981.
The day of the mysterious disappearance.
Our 10th anniversary. To the day.
John Pennekamp State Park on Key Largo.
Where they say the barracuda like flashy jewelry. So they encourage you not to wear any when you snorkle.

So we didn’t, instead depositing all shiny objects into the glove compartment of our yellow Dodge Omni. I hunkered down in my seat while I removed my wedding set, which was soldered together. There was nobody in the parking lot anyway, so I’m sure–almost–that nobody saw what I did. We locked the doors.

But when we returned from our snorkel trip, where we were followed by curious barracuda, my rings were gone! Everything else was there. Dennis’ wedding ring and watch. Our class rings. Everything.

Nothing.
Zippo.
Gone.
I loved those rings. Engraved with love. I cried all night.

Several times, over the years we had that car, one of us would get the urge to go out and ransack it. Take a flashlight. Search every nook and cranny.

Jesus told a parable in Luke about a woman who lost some treasure. She had ten pieces of silver. They likely represented a dowry. Maybe something akin to a wedding ring. Something that symbolized not only blessing, but perhaps even love, security if something happened to her husband. Sometimes a woman would run a cord through pierced coins and hang them around her neck as a necklace or weave them into her hair or carry them in a bag on her person.

The woman ransacked her house looking for one missing coin. She looked high and low. She lit a lamp and broke out the broom. Maybe she searched frantically, and then persistently and methodically. Like we might look for a single stone to a set. Something very precious. Perhaps her tears turned spots of the dirt floor to mud.

Imagine her joy when she noticed a glint of it in the faint light! Found!
Party time!

Jesus told this story to the Pharisees and scribes as an example of the joy in heaven over one sinner who repents.

We’ve never found my ring, though. No party here.

I’ve often thought about how I don’t seek HIM as diligently as I searched for those rings. I don’t comb through His Word as methodically as I combed through that Omni.

How often do we put the earthly over the eternal?

How often do we put security over Security?

How often do we put regalia over relationship?

How often do we put our treasures over the Treasure?

What are your thoughts?

Or suppose a woman has ten silver coins and loses one? Does she not light a lamp, sweep the house, and search carefully until she finds it? And when she finds it, she calls her friends and neighbors together and says, ‘Rejoice with me; I have found my lost coin.’ In the same way, I tell you, there is rejoicing in the presence of the angels of God over one sinner who repents.” ~Luke 15:8-10