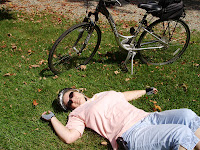 Did that catch your attention?  Not to worry.  No need to call 911.  I managed to escape.  Barely.

It’s not the first time he’s tried to do me in.  Two weeks ago, it was a 6-mile hike.  I was out of sorts the whole next day.

Today he wanted to ride bikes.  Me?  Not feelin’ it so much.  Too risky.  But I gave in.  After he brushed all the cobwebs off my bike and checked my helmet and gloves for brown recluses.

Once we started down the road, my reservations faded, and I enjoyed the ride.

I smelled lots of fresh air intermingled with grass and whiffs of fabric softener along with spicy and sweet flower scents.  No manure today.

Some of the things I thought about:
The “old days” of riding horses down the same roads.
How I had let myself get so out of shape.
Why I hadn’t invested in those funny biking pants with the padded bottoms.
How much life insurance Dennis has taken out on me.
Why we didn’t do this more often.
How breathless pumping up the hill left me.
How exhilarating the rushing air in my face felt as I coasted down.
How I needed to focus straight ahead when danger (cars) sneaked up behind.
How God created such beauty that left me in breathless wonder.
What I would have missed hanging at home.
How sometimes you just gotta do it.
How many life lessons can be found in a simple bike ride.

And I thought about this poem recorded in Tim Hansel’s book, Holy Sweat.

The Road of Life

At first, I saw God as my observer,
my judge,
keeping track of the things I did wrong,
so as to know whether I merited heaven
or hell when I die.
He was out there sort of like a president.
I recognized His picture when I saw it,
but I really didn’t know Him.

But later on
when I met Christ,
it seemed as though life were rather like a bike ride,
but it was a tandem bike,
and I noticed that Christ
was in the back helping me pedal.

I don’t know just when it was that He suggested we change places,
but life has not been the same since.

When I had control,
I knew the way.
It was rather boring,
but predictable…
It was the shortest distance between two points.

But when He took the lead,
He knew delightful long cuts,
up mountains,
and through rocky places
at breakneck speeds,
it was all I could do to hang on!
Even though it looked like madness,
He said, “Pedal!”

I worried and was anxious and asked,
“Where are you taking me?”
He laughed and didn’t answer,
and I started to learn to trust.

I forgot my boring life
and entered into the adventure.
And when I’d say, “I’m scared,”
He’d lean back and touch my hand.

He took me to people with gifts that I needed,
gifts of healing,
acceptance
and joy.
They gave me gifts to take on my journey,
my Lord’s and mine.

And we were off again.
He said, “Give the gifts away;
they’re extra baggage, too much weight.”
So I did,
to the people we met,
and I found that in giving I received,
and still our burden was light.

I did not trust Him,
at first, in control of my life.
I thought He’d wreck it;
but He knows bike secrets,
knows how to make it bend to take sharp corners,
knows how to jump to clear high rocks,
knows how to fly to shorten scary passages.

And I am learning to shut up and pedal
in the strangest places,
and I’m beginning to enjoy the view
and the cool breeze on my face
with my delightful constant companion, Jesus Christ.

And when I’m sure I just can’t do anymore, He just smiles and says…”Pedal.” ~Author Unknown

Have you entered into the adventure?  Are you throwing off extra baggage?  Have you learned to shut up and enjoy the ride?