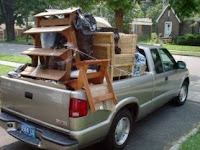 I dreamed last night that a man had parked his pickup truck in our backyard, facing the house so he could watch me.  I had a sense it was someone from high school, but I didn’t recognize him.  My husband and I were both uncomfortable, but we accepted his presence.

At some point, though, I was alone at home and afraid.  I tried to sneak out of the house and fumbled with the keys while locking the side door.  I crossed the breezeway into the garage and realized “he” had already raised the garage door.  Shaking, I managed to get in the car and tried to back out, but his truck was now parked behind me.  He actually tried to direct me out, but I could not budge without hitting his truck–which was filled to the top, overflowing with what appeared to be everything he owned.

Then he picked up a high pressure hose and began to spray water and soap all over my car.  I screamed at him to stop using that stuff on my car because it would damage it.  I tried to back up again, but it was hopeless.  Then I woke up.

But I’ve been thinking…

This man’s stuff penned me in and blocked my departure.  How does the excess baggage we carry hinder not only us but also another person?  Can it stifle their dreams and block their progress?  Does stuff we carry that we don’t need to carry make life a little heavier for a loved one?  Burdens that should be passed off to someone more able to bear them drag us down.  But can they hold others back as well?  Does our lack of rest make life a bit less peaceful for those around us?

What baggage do you carry that is weighing someone else down as well?